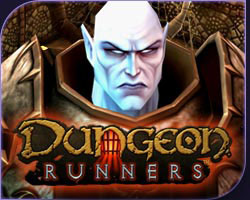 If you aren’t familiar with the game Dungeon Runners, you should probably check it out. You could probably most understand it as an online-only Diablo-like RPG. It’s free, so there is a very low threshold for entry – just create a free account, download the client, login, and play. If you like it, you have the option of paying $5 per month for extra capabilities, but you can play free as long and as much as you like if it doesn’t seem worth $5 per month to you.

I was in the beta of the game for a while. It was enjoyable, but the biggest problem for me was a limitation of one character per account. My older son likes the game, and it seems at least moderately age-appropriate, so I let him play. With only one character for an account, that meant I couldn’t have and develop a character – I let him delete and create characters as he liked, because he played it more than I did. It looks like that limitation is about to go away, however, as news of the upcoming patch and content upgrade will add in a 3 character per account allowance.

Free-to-play dungeon crawler Dungeon Runner is expected to get its next big update this week. I chatted briefly with lead designer Mark Tucker earlier today about what we can expect to see from the update, labeled Chunk Number One.

In a nutshell, the update will add player versus player worlds, multiple character support per an account, in-chat item linking and a new high level dungeon.

My brother already has a paid account. When this update hits, I’ll probably join, as well. I might even get 2 accounts – one for me and one for my older son. And if you wonder how a free to download and free to play MMO works:

While NCSoft is still hesitant to talk about the profitability of the mostly free game, you can pay for access to a small set of exclusive features and a new members only server, they do say they are quite happy with how the game is shaping up.

‘We are tracking well compared to other NC Soft titles,” Tucker said. “The development team has a goal in terms of number of subscribers. There is a point when we become profitable and it’s not a very big number. At that point we can grow the development team.”

NC Soft spokeswoman Opal Lertutai said they have 120,000 active accounts and that they have about 75 percent of the $5 a month paid accounts needed for the game to break even.

So it looks like they are pretty close to getting their target number of minimum paid accounts to keep the game alive and growing. Like I said above – once this update comes out, you can add me in to that base, as well. The single character limitation was all that kept me from getting more into the game.

Initially planned for release as part of the BioShock limited edition, the BioShock art book is now available as a free download in hi-res or standard-res PDF.

I would *LOVE* to have this as a glossy printed book.  I’m a sucker for gaming art.

As a hardcore gamer, there are some things you just don’t want to hear in reference to games. Anything referring to Barbie is bad. Barbie and Horse appearing in the title is much worse, because you know only one way that could be a good game, yet you also know there is no way Barbie would be in a bestiality pr0n game. Though Mary Kate and Ashley are hotties, seeing their name on any game is a sure sign you’d want to pass it by. But we’ve got a couple of new entries into the games-you-never-want-to-see-developed category.

Did you know there’s actually a Barbie MMO? BarbieGirls.com is the kinda thing that makes hardcore gamers groan, but there is — a pink-festooned, dolls-getting-manicured, ‘tween girl-focused MMO, and moreover, it’s ridiculously popular. In its first 60 days, it signed up three million users. Now it’s up to four million — that’s half of what Second Life has drummed up in its entire lifespan — and growing at a rate of 4500 a day.

Not to be left out of the competition, the freaky skank dolls of Bratz are getting in on the action with Be-Bratz.com, another ‘tween girls’ virtual world with a real-world component — you buy a $29.99 Bratz doll-slash-USB key, and it comes with some pink computer peripherals (a mouse and pad) that look like Japanese sex toys.

Please – if you ever hear that I’m playing these games in any serious manner, just shoot me. Neither Barbie nor Bratz should ever exist in a game title that references MMOs.Ã‚Â  (via Kotaku)