A visual guide to crates and barrels in video gaming

Yes folks, that bottled water you like so much comes from the same place your tap water does.

PepsiCo Inc. is the latest company to offer some clarity about the source of its top-selling bottled water, announcing Friday it will change Aquafina labels to spell out that the drink comes from the same source as tap water.

The group Corporate Accountability International has been pressuring bottled water sellers to curb what it calls misleading marketing practices. It says the Aquafina label’s mountain logo perpetuates the misconception that the water comes from springs.

Makes me think of the episode of Penn and Teller’s Bullshit in which they tested perceptions of tap water sold as bottled water based on price and descriptions of each water type. Yes, we are, on the whole, idiotic consumers.

Just an advanced notice – I dig papercraft, and expect to post a number of these awesome works in the future

I’m noticing the WTF? category often coincides with the Stupid category on the blahg. Well, in instances like this, I think that is a reasonably accurate way to categorize the information that follows.

A Berkeley watchdog organization that tracks military spending said it uncovered a strange U.S. military proposal to create a hormone bomb that could purportedly turn enemy soldiers into homosexuals and make them more interested in sex than fighting.

Pentagon officials on Friday confirmed to CBS 5 that military leaders had considered, and then subsquently rejected, building the so-called “Gay Bomb.”

OK, so they considered and then rejected the idea. But really, the way to make men more interested in sex than in fighting is to, well, suggest they have sex instead of fight. Provided there are enough willing women to put out for the men, that’s the end of the necessary weapons and attack planning.

See, I should be a military planner – I totally understand men’s sexual desires more than the current planners.

Sometimes, you see ads turn up in the wrong place or two otherwise unrelated ads located in a way that makes you grin.

There are a lot of them. Check out the full article linked above for many more.

I have no idea what to even make of this.

Officers responding to a report of an exorcism on a young girl found her grandfather choking her and used stun guns to subdue the man, who later died, authorities said Sunday.

A bed had been pushed up against the door; the officers pushed it open a few inches and saw Marquez choking his bloodied granddaughter, who was crying in pain and gasping, Tranter said.

A bloody, naked 19-year-old woman who police later determined to be Marquez’s daughter and the girl’s mother was in the room, chanting “something that was religious in nature,” Tranter said.

He was taken out in hand-cuffs, but later stopped breathing. That is just so frikkin’ bizarre that I’m not sure what to make of it. I know the difficulty of dealing with a 3-year-old, but I have never attemped an exorcism not choking the child.

Some interesting rumbles going on in the retail market lately. Rumblings from the sales-outlet side indicate Target will carry only Blu-Ray players this holiday season, Blockbuster will expand Blu-ray offerings but not HD-DVD movies, and BJs wholesale will stop carrying Hi-Def DVD movies in store (although the format will still be available to online shoppers for the wholesaler). Microsofts support of HD-DVD aside, this suggests Blu-ray is going to push further ahead in the fight for next-gen DVD supremacy.

Could Sony have avoided the Beta-Max/PSP Memory Stick Duo/Digital8 losing format problem they seem to have suffered since the days of the Walkman? It is looking like Blu-ray is coming out on top this time, which has to be good news to Sony. (some information via Joystiq and more Joystiq) 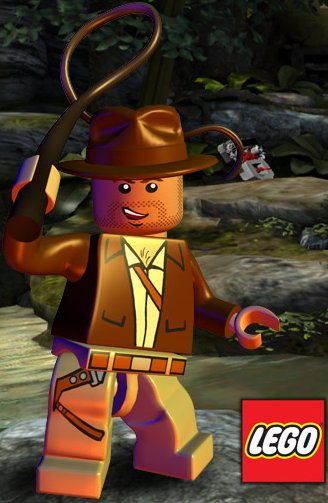 I am not sure there is anything else that needs to be said. Go there now!

Given how well done the LEGO Star Wars games have been, this is one I already look forward to playing. (via Joystiq)

I know I’m late to the party on this, but I have finally finished the last Harry Potter book. Bought it release day, read one-third of it, then the wife took it to read after she finished whatever it was she’d been reading that week-end. After I got it back, I only read a few chapters a day – I’m not a reader in a hurry to get to the end. So I just finished it, and now my wife can talk to me about it all she wants. Seems she has been waiting for me to finish it because there is something in or near the end she wants to talk about but she did not want to spoil the book for me.

Since I am not bothered by knowing endings of movies or books before I finish them, I told her she could talk about it, but she wanted to wait. Guess tonight she will finally get to tell me whatever it is that she wanted to discuss.