Since I’ve just been critical of the Bush administration on a number of things, and ended by pointing out the handling of the attorney firings fiasco, I figured I needed to put something up about my take on the firings. I’ll start by saying I don’t care that the firings took place – that is the President’s right and the attorneys’ risk. I don’t care that we, as Americans, were told that these attorneys were fired for job related issues, even though that claim has been shown highly improbable and inaccurate. I am surprised that this issue has garnered so much attention, but I don’t feel the attention is unwarranted.

I do care that the President has the right to replace the attorneys for an indefinite time without Congressional review. Thankfully, that right is being reviewed and presumably removed. And I do care that this affair has shown us that our top law man, Attorney General Gonzales, seems not to be trustworthy nor heavily in favor of actually protecting the rule of law as much as advancing political plans. I understand that this happens all the time, but I want the Attorney General to at least appear to be strongly motivated to protect the law over protecting the party. That may be unrealistic, but at least some attempt to favor law over party politics is necessary for my continued support.

When Gonzales was first up for appointment, I listened to the review sessions. I read up some on his background. I tried to stay informed of topics discussed in Congress and Gonzales views on rulings of the law. I saw some minor things that I wasn’t in favor of (for instance, Gonzales is not a proponent of personal rights – a pet protection of mine), but overall he looked like a good candidate. I had no real complaints when he was approved and assigned US Attorney General. Since then, however, he has given a bizarre interpretation of the Constitution in at least one instance I know, and now looks to be less trustworthy and more politically motivated than law and Constitutionally motivated. It’s an unavoidable reality that people’s personal biases will come out in such situations, but I’m concerned Gonzales may be letting too much personal viewpoint into his work. It’s hard to explain, so I’ll not get too deep into that. I just am expressing a growing personal unease with Gonzales and the job he has done since passing Congressional review.

I’m not ready to call for his resignation as many, liberal and conservative (and, unsurprisingly, another liberal), in Congress are. But I am keeping a careful eye on his performance and his work so I can better re-evaluate him (not that my view will have meaning to anyone but me).

Really, this is the kind of thing that is so obvious it seems some digital music provider would have already done this. I’ve complained about the lack of this feature before, and skipped purchasing online music in some cases because I didn’t see a store offer it. What the hell am I babbling about now? Why, Apple’s new complete my album purchasing option, naturally.

Apple(r) today announced Complete My Album(r), a groundbreaking new iTunes service that allows customers to turn their individual tracks into a complete album at a reduced price by giving them a full 99 cent credit for every track they have previously purchased from that album.

“Music fans can now round out their music collections by upgrading their singles into complete albums with just one click, and get full credit for those songs they have previously purchased from iTunes,” said Eddy Cue, Apple’s vice president of iTunes. “Complete My Album is a wonderful new way that iTunes helps customers grow and enjoy their music collections.”

Complete My Album offers customers up to 180 days after first purchasing individual songs from any qualifying album to purchase the rest of that album at a reduced price. When users buy any song on iTunes the corresponding album will immediately appear on their personalized Complete My Album page with the reduced price listed. For example, a user who’s already purchased three 99 cent singles and decides to buy the corresponding $9.99 album would be able to download the remaining songs to complete the album for just $7.02, without having to buy the singles again.

See? It’s a “Duh!” feature for people who like to legally acquire music for our portable media devices. (via CrunchGear)

Well, at least for married men. What you are looking at there is the condom dispenser, available for purchase from Canoe Online. Dimensions aren’t given on the page, but looking at the height vs. width vs. depth, I’m guessing it will hold either 6 (half a box) or 12 (full box). In either case, all you married men can get one, load it up with a lifetime supply of your favorite condoms, and never again have to worry about where the rubbers are when that special day comes around once every few years. (via CrunchGear)

With the upcoming stamp rate hike, the Postal Service is going to a “Forever” stamp (via Consumerist)

I remember reading before that this was going to happen. Now, however, we have a tiny bit more information than before: 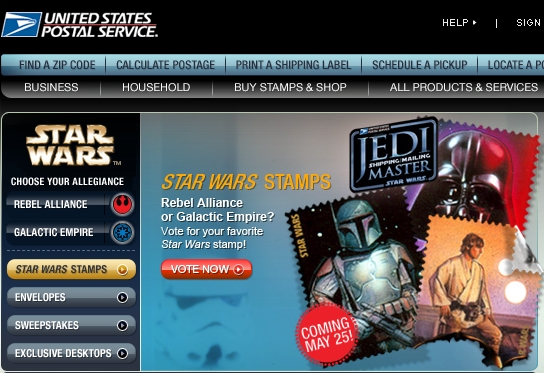 So? What are you still doing here? Get over to the USPS web site and vote for the Star Wars stamps you want to see come May 25th!