From the Bash.org site I recently linked to:

User1: what should I give sister for unzipping?
User2: Um. Ten bucks?
User1: no I mean like, WinZip?

Please, someone else tell me they find that as funny as I do.

Working through my huge backlog of “Stuff I want to post but usually don’t want to spend time writing up” I found this awesome picture. I have no recollection of where I got the picture. I don’t remember what story went with the picture. But in an attempt to clear at least one item from my backlog, here is a warning against disposal of radioactive animals at one location: 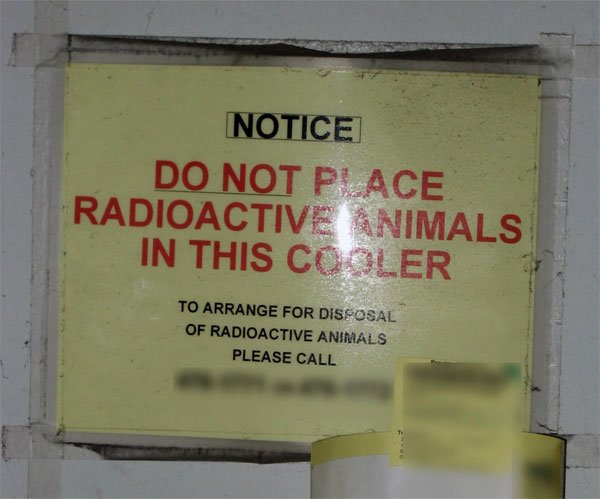 Now you can keep up to date with all things Hillary through blogHillary.

Welcome to the campaign’s new blog. I’m Crystal Patterson, and I’ll be blogging for the campaign as Hillary travels around the country meeting all of you and sharing her vision for America. I was the one asking your questions during Hillary’s live webcasts (if you missed them, you can watch them here). I look forward to getting to know all of you as the campaign moves forward, and to hearing your ideas, stories, questions, and opinions.

I’m working my way through all 100+ comments, but am too early in to say how visitors are settling in. And apologies for the “… is GO!” gaming reference in the title. I just couldn’t think of anything that fit.

Will we be seeing an up-to-date return of the classic Archon sometime soon?

If you want to see what the Presidential candidates are doing on various social networks, you want TechPresident

As part of the ongoing effort to get Quake on every possible platform, here is a prerelease, um, release of Quake DS

Blogging software is easy to find. Lots of it is free. What isn’t is often inexpensive. Yet somehow, the Motion Picture Association of America managed to not only select non-free blogging software but also to not pay for it. In fact, in a bizarre show of disregard for the value of others’ intellectual property, the MPAA stripped all references to the original author and all links back to his site. That does seem odd behavior for an organization who believes piracy to be illegal, bad, and all kinds of evil. It just seems to not match their preaching about piracy:

For consumers to continue to experience the variety and quality of movies they expect, piracy must be controlled. The entertainment industry recognizes the potential of technology to deliver content in new and exciting ways. However, the looming threat of piracy can thwart innovation.

Now I ask, does that sound like the kind of organization that would steal intellectual property created by someone else, strip away all indications of who that someone else is, and then use said IP for their own benefit and profit? Apparently “Do as I say and not as I do” is creedo for the MPAA. (via CrunchGear)

This is kinda old news, but since I’be been on a case-mod-seeing virtual self-guided tour lately and came upon it again, I figured it wouldn’t hurt to post it. Wanting to improve the appearance of his iPod, ZapWizard decided to create a new custom face-plate for it. You can see his excellent write-up (with pictures) of how he created this beauty. Seeing this makes me weep for my lack of hand-skills. 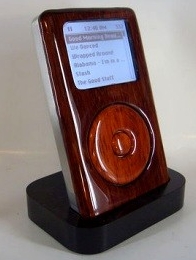 This photo is snagged from the original article at Bit-Tech and cropped. Apologies for cutting off the bit-tech identifier, but I wanted a narrower pic for my site. I just want to make sure no one thinks I’m taking any credit for the image as posted. All respect to the original article hosts at Bit-Tech and the fantastic write-up for it by ZapWizard.

I’ve avoided posting about this because it seemed like most people wouldn’t be interested in it, but since I’m seeing stories about bionic eyes on almost every web site I frequently visit, I figure I need something up about them here, too. Work on these eyes has been underway for a while, and an improved version of already-in-testing eyes appears ready for trials on humans.

At the annual American Association for the Advancement of Science, a research presented the idea that the blind could have their vision restored, thanks to bionic eye implants which would be available to patients in the next two years.

The first of such an implant has been in the works for five years now. Patients fitted with older versions of the “bionic eyes” have been reported to be able to see light, shapes and movement. Newer versions with higher resolution has recently been developed; the US Food and Drug Administration has already approved the implant of these devices in an exploratory patient trial happening across America in two years.

This is not a general cure-all for loss of vision, as it only applies to certain forms of blindness. Also, the device requires an external processing unit for now, but over time miniturization should help with that tremendously. Improving from 16 pixel units 5 years ago, the soon-to-be-tested new version offers 60 pixels and fits in about 1 mm2.

Find more details at the BBC.

[tags]Bionic eye, Steve Majors – the next generation, Bionic eye for less than $6 million[/tags]