I must admit, I missed this movie when it was first out in theatres. I didn’t catch it until a few years later when I got the video and then again a couple years after that when I got the DVD. Now, I can get the Ultimate Collector’s edition DVD set of Blade Runner for a mere $55. That’s not bad, considering all the geeky greatness you get. 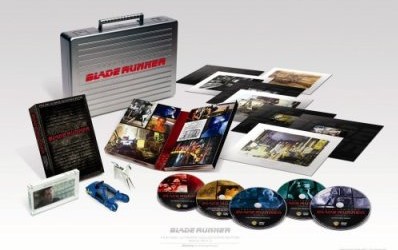 In celebration of Blade Runner’s 25th anniversary, director Ridley Scott has gone back into post production to create the long-awaited definitive new version. Blade Runner: The Final Cut, spectacularly restored and remastered from original elements and scanned at 4K resolution, will contain never-before-seen added/extended scenes, added lines, new and improved special effects, director and filmmaker commentary, an all-new 5.1 Dolby(r) Digital audio track and more. Harrison Ford, Rutger Hauer, Edward James Olmos, Joanna Cassidy, Sean Young, and Daryl Hannah are among some 80 stars, filmmakers and others who participate in the extensive bonus features. Among the bonus material highlights is Dangerous Days, a brand new, three-and-a-half-hour documentary by award-winning DVD producer Charles de Lauzirika, with an extensive look into every aspect of the film: its literary genesis, its challenging production and its controversial legacy. The definitive documentary to accompany the definitive film version.

The Ultimate Collector’s Edition will be presented in a unique 5-disc digi-package with handle which is a stylish version of Rick Deckard’s own briefcase. In addition, each briefcase will be individually numbered and in limited supply. Included is a lenticular motion film clip from the original feature, miniature origami unicorn figurine, miniature replica spinner car, and collector’s photographs, as well as a signed personal letter from Sir Ridley Scott.

That qualifies for w00tness in my book. Hit the Amazon item link for the disc-by-disc details. The disc 3 offerings look most interesting to me.