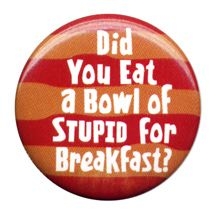 The first of several posts on buttons I need to have so I can wear them to work.

The federal government has a web site dedicated to spreading lies and propaganda stating that the PATRIOT act is good for the country and never has caused anything bad. What’s so odd about that is that while it appears to be a Department of Justice site, that is the department that has just written a massive, damning report on the many abuses of the PATRIOT act. Of course, there are still too many Americans (not surprisingly, mostly conservatives with a smattering of independents) blinded by their love of our current President, regardless of how many times he lies and deceives, who believe the executive branch representatives when they say the PATRIOT act is not abused and that Americans’ rights are protected under the PATRIOT act.

We have to suffer Presidential signing statements, though they carry no legal force, regardless of President Bush’s determinination to make the Executive branch also function as the Legislative branch. We have an attorney general who states that Constitutional protections against taking rights away don’t mean we actually have those rights. We had ongoing discussion among various high-level political folks about the validity, legality, and appropriateness of torture, especially in terms of dealing with Al Queda prisoners. To me, the fact that even the easily followed guidelines in the PATRIOT act which allow our government to ignore our Constitutionally protected rights are not followed is not hard to believe.

I’ve been opposed to this law even when I thought the bad provisions were at least subject to the oversight written into the law. Now that I see that those charged with protecting us can’t even resist abusing the simple rules which allow for paper trails, I’m totally disheartened. When are we going to see this undone? Why can’t the liberals do something useful with their tiny majority in Congress to get rid of this? My theory is lack of backbone, but I’m open to other interpretations.