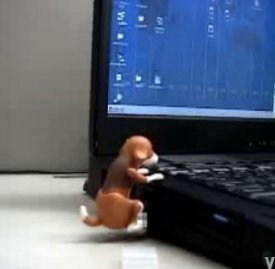 The visual effect only works on laptops, but get one of these dog-shaped USB-keys and you’ll have your very own laptop keyboard humping canine. (via boingboing)

I thought this kind of thinking went out of fashion 15 or 20 years back, but apparently the uppity-ups at the top of the Israeli Defense Forces think fantasy gamers are automatically suspect for security clearance.

Does the Israel Defense Forces believe incoming recruits and soldiers who play Dungeons and Dragons are unfit for elite units? Ynet has learned that 18-year-olds who tell recruiters they play the popular fantasy game are automatically given low security clearance.

“They’re detached from reality and suscepitble to influence,” the army says.

Although that is annoying, I must say that looks like a way to reduce your risk in the military. After all, who wants to send a security risk out on the dangerous missions? On the other hand, I guess the folks who don’t want to risk losing a soldier with high security clearance might see the weak-willed gamer losers (like me) as more disposable. Hmmmmm. Impass. Never mind.

This is really stupid. You don’t want to read it. I’m writing this completely for my own entertainment. It’s really stupid, even given my low standards on t3H Blahg.

Back in 1971, Pastor Jack Hyles laid down this exceptionally important message concerning the welfare of your children. Satan is assualting our culture’s values by starting at the root of our future – the children. Ohhhhh, won’t someone PLEASE think of the children?

Pastor Hyles got really upset after seeing how schools were corrupting our children. Someone, perhaps one of his delicate flock, had her delicate sensibilities affronted when she visited one of the local public schools.

END_OF_DOCUMENT_TOKEN_TO_BE_REPLACED 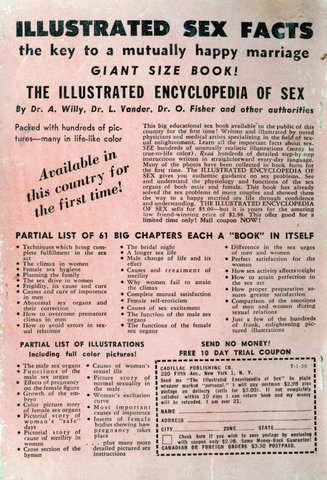 According to the January 1959 issue of Sexology magazine (sadly, no longer published – I learned of it from the always wonderful Modern Mechanix blog), the key to a mutually happy marriage is The Illustrated Encyclopedia of Sex. Thankfully, you can order it from the fine folks at Cadillac Publishing Company in New York.

Here are some of the things you can learn from this book, along with my guesses for the answers:

The climax in women

Typical male: They can do that?

The sex drive in women

Moderate to high when single. Non-existant after marriage.

Frigidity, its cause and cure