OK, when I get a chance to update my Gift ideas page, I’m adding Maddox’ book “The Alphabet of Manliness” (or search Amazon for ISBN #080652720X if the link is broken) to the list. I recently got to see a few pages from the book and decided this is something I must have. Now understand – I’m not actually manly enough to live up to the book’s guidance, but I am at least manly enough to read the book without hurting myself. How can you not love a book that starts “A is for Ass-kicking” anyway? 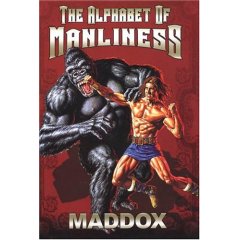 The phrase “Ass-Kicking” has changed over the years from its humble origin as the union of one’s foot with another person’s ass, to the expression today that has nothing with asses, or even kicking. The picture at the beginning of this section epitomizes ass kicking. Time for a pop quiz: What’s more awesome than a lumberjack smashing Santa in the face? (A) Nothing or (B) All of the above. I gave this quiz to my friend’s wife, and she got the wrong answer. She kept asking questions like “what’s so cool about Santa getting punched in the face? That’s not cool, that’s mean.”

In the Ass-Kicking section alone, one learns the proper way to perform the cock punch (2 different styles), the dropkick to the face (no pansy tosskicking here – drop the target and kick the face), plain-old punch to the mouth, head-butt to the ovaries, and much more – all with illustrations. And yes, it’s a humor book, so don’t get too worried about the described content.

Buy this book for me and help me improve my manliness, which will in turn improve my natural awesomeness. It’s only $10 for a far greater return in my own greatness. Come on – you know you want to. 🙂

I totally feel this kid’s pain. I wish Google would pay $1.6 billion for my web site, too. I suppose I probably need a bit more quality, content, and viewership before I can get that, though.

[tags]bLaugh, I wish Google would, Google doesn’t want to buy you today[/tags]

Let me be the first to say that I, for one, welcome our new robot overlords.

In an early preview of the future of humanity comes this response from robots: you taste like bacon. Don’t forget this when the robots take over the world.

So, apparently the guys at NEC thought it would be cool to make a wine-tasting robot. The robot — pictured above — fires a beam of light into the wine, and then uses an infrared spectrometer to analyze the reflection. It studies the chemical composition of the wine and delivers an instant verdict about how good it is.

But the NEC guys decided to show off the robot to the media, and that’s when it revealed its morbid secret. As the Associated Press reports:

END_OF_DOCUMENT_TOKEN_TO_BE_REPLACED

Daniel Radcliffe wants people to think more of him than just “Hey, it’s Harry Potter!” So next year he is performing on stage in the drama “Equus” including one scene done in the buff. So actually, the headline should be “Daniel Radcliffe gettin’ nekkid?” but that wouldn’t have been a sensationalism whore’s proper way to post, so I went with the less accurate title.

“Part of me wants to shake up people’s perception of me, just shove me in a blender,” he told the magazine in an exclusive interview on the set of the fifth Harry Potter film, “Harry Potter and the Order of the Phoenix.”

In “Equus,” Radcliffe will play a “troubled young man with a religious-erotic obsession with horses,” the magazine reported.

It seems like only yesterday I was reporting on some other people with similar issues.

I suppose others who keep up with politics are less surprised by this than I am, but recently, a Florida judge ruled that Sen. Foley ballot replacement Joe Negron cannot place signs around voting locations telling voters that a vote for Foley would register as a vote for Negron instead. I’m still trying to grok this decision. END_OF_DOCUMENT_TOKEN_TO_BE_REPLACED

Access the complete works of Charles Darwin for free online. This collection includes roughly 50,000 pages of text and 40,000 images. The site isn’t actually fully complete yet, as the final site should host approximately double that by 2009. (via boingboing)

Thanks to Bill at DQ I now subscribe to American Heritage Invention and Technology. It’s a quarterly techie magazine, with various articles, some brief some lengthy, on all manner of interesting technologies. The latest issue has a 10-page or so article on the history of DNA profiling. All of you that watch crime shows like CSI or Law and Order (and the 29,531 shows that came from it) have likely seen some coverage of DNA profiling. But if you aren’t a scientist in the field, there is a great chance you don’t really know much about it. You can’t learn everything that matters, but the history of testing, as well as some information on how and why testing works are covered in the story.

Since I subscribe, I get the stories on paper. You, lucky reader of my awesome site, get instead a pointer to the publically accessible online reprint of the article. It will take a while to read, but if you have an interest in geeky pursuits like I do, you’ll enjoy every bit of it. Hell, there’s even mention of the DNA testing from the OJ Simpson trial and why it was ultimately not highly influential in rendering a guilty verdict. That’s pop culture AND science/technology all in one little story. So you get education while being entertained. This ain’t no American Idol, where you just get entertainment (for values of “you” not including me, since I find the show grotesquely idiotic). So go now – read and learn.

In July 1986 residents of the english village of Narborough learned that someone had raped and murdered a 15-year-old schoolgirl named Dawn Ashworth. It was a second shock for the bucolic community, which lies about a hundred miles north of London. An equally harrowing crime had rattled the area less than three years earlier. Late in 1983 a passerby had found the violated body of Lynda Mann, also 15. News of the latest atrocity frightened and outraged local citizens and left police desperate.

Authorities focused their investigation on a slow-witted hospital porter of 17, who, under intense interrogation, confessed to killing Ashworth. He denied any involvement in Mann’s killing, but prosecutors were convinced he was lying. They needed to link him conclusively to both crimes.

When he [Ed note: Dr. Alec Jeffreys – the creator of the DNA testing method used] analyzed several of the variable sections, he was able to point with virtual certainty to a single individual. Yet at the end of his rigorous lab work, he thought he must have made a mistake.

“My first reaction was ‘Oh my God, there is something wrong with the technology,'” he said later. His test showed that one man had indeed raped both girls. But, in spite of his confession, the youth in custody was not the culprit.