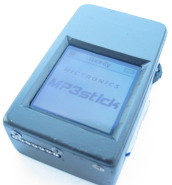 you have some real talent with hardware project building, you might be interested in this article about building your own portable mp3 player. Just be aware that it is not for the meek.

Project description – This is not a beginner project!

The MP3stick is a simple and small portable MP3 player. A microcontroller Atmel AVR ATmega128 is the heart of the circuit. MP3 decoding is done by an VLSI VS1011b decoder IC. A MMC/SD card works as memory medium for MP3 files, playlist files and skin files. The player is designed to draw his power from a LiIo/LiPo battery with 3.6V. a charger cicuit, based on MAX1811, is included. All information will be shown on a Nokia color LCD with 128×128 pixel and 256 colors. The player will work in text-only mode and if a skin file is available, also with nice graphic skins. A docking port allows outside connectivity for serial control signals, audio signals and charger voltage input.

All the necessary hardware is detailed in the guide following the introduction. A number of pictures are included to see various phases in the build. Firmware information is given. Even finaly build size (22x39x64mm) and approximate battery life guidelines are included. The work on this is impressive, and if you have the talent to build, this looks like a great project to get involved with.

In 2001, President Bush signed an executive order which would allow a President to disallow the publication of Presidential papers as long as he/she wished, even extending that write to descendants.  Since these documents are public records except in the case of classified information, this has never been done before.  Formerly, all Presidential documents (again, excluding classified materials) were released as the public records they are after a set time past the end of a President’s administration.  With the Bush executive order, researchers had to prove a need for the records before they would be released if any relative wished to hold them as non-public records.  And that’s pretty hard to prove, when you don’t know what the records hold.

Recently, a judge upheld the public’s right to access to these records and blocked the portion of the executive order which would stop the release of papers.

A federal judge on Monday tossed out part of a 2001 order by President George W. Bush that lets former presidents keep some of their presidential papers secret indefinitely.

U.S. District Judge Colleen Kollar-Kotelly ruled that the U.S. Archivist’s reliance on the executive order to delay release of the papers of former presidents is “arbitrary, capricious, an abuse of discretion and not in accordance with law.”

You might remember Kollar-Kotelly for her work on the Microsoft case.  While some of her work in the past has been criticized, I like her for the fact that she has ordered Bush administration officials to speak on the illegal domestic surveillance in the post-9/11 era.