I am so sorry for once leading you, my brilliant and far above-average reader, to believe that the coming zombie uprising was one of the greatest fears we had to face. Apparently, the robots have been amassing numbers and improving their designs for long enough to be the real threat to humanity. I don’t know how soon the robots will take over, but I believe the wall-climbing Waalbot is further proof of the superiority of robots. We humans have Spiderman, and, if you are to believe The Simpsons Movie, Spiderpig. I present to you now early images of the robotic army of the future – the Waalbot: 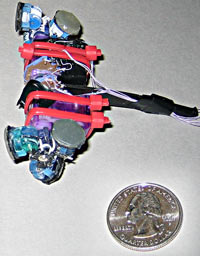 Approach: The tri-leg Waalbot will use dry adhesion to stick to walls and ceilings as it climbs. The tri-leg design uses simple rotary actuators for a singly degree of freedom motion, but includes passive joints and elastic flexures to allow this motion to provide the preload and peeling forces necessary to climb using dry adhesion. A PIC microcontroller is used to control the motion of the robot and onboard power makes the system fully autonomous.

You may look at the image and claim me a fool for phearing such a miniscule droid, but just like with little rat dogs – sometimes the smallest ones have the most fight in them. And when the robots are swarming you, and your enemy-bot sensor indicates hundreds of them are in front of you and behind you – remember they are in the ceiling, and you should check the vent shafts, too.

The site also has a few cool videos, including a sped-up movie of the bot climbing an acrylic wall done last year. I imagine more work will allow the designers to increase the weight or carrying capacity of the waalbot and we’ll end up with a more useful critter in the future. (via Spatial Robots)