Somewhere in my recent wanderings of the vast web-o-space, I found this political testing site which aims to give you a simplified graphic view of where you sit in the political spectrum. Attempting to expand the traditional political view from a simple left/right setting, the test gives results along an economic as well as social scale.

Both an economic dimension and a social dimension are important factors for a proper political analysis. By adding the social dimension you can show that Stalin was an authoritarian leftist (ie the state is more important than the individual) and that Gandhi, believing in the supreme value of each individual, is a liberal leftist. While the former involves state-imposed arbitary collectivism in the extreme top left, on the extreme bottom left is voluntary collectivism at regional level, with no state involved. Hundreds of such anarchist communities exisited in Spain during the civil war period.

You can also put Pinochet, who was prepared to sanction mass killing for the sake of the free market, on the far right as well as in a hardcore authoritarian position. On the non-socialist side you can distinguish someone like Milton Friedman, who is anti-state for fiscal rather than social reasons, from Hitler, who wanted to make the state stronger, even if he wiped out half of humanity in the process.

The chart also makes clear that, despite popular perceptions, the opposite of fascism is not communism but anarchism (ie liberal socialism), and that the opposite of communism ( i.e. an entirely state-planned economy) is neo-liberalism (i.e. extreme deregulated economy).

It’s an interesting expansion from what most folks use in considering political leanings, I think, and while the overall test-to-rating process seems a little simplistic, it appears at least well thought out. And even if the results aren’t that accurate, they should help get a conversation going on political evaluations for those interested in such discussions.

So where do I personally sit in this scale? Well, I fell in to the quadrant where I expected I would be, but not quite as far from either axis as I had anticipated. See my standings below the break: 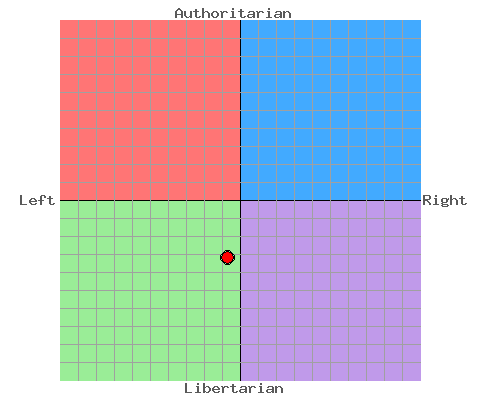 So, those that know me – any surprise there? Would you have guessed differently? I try to be more moderate than most folks I know (and more than my wife prefers, what with her being a flaming liberal), but do realize I have far more liberal leanings than I want. I’m working on a more centrist standing, but President Bush has really turned me anti-right on several fronts, and it will take a while for me to moderate some of that. I don’t want to outright call myself anti-authoritarian, but I do feel our government is too hands-on and intrusive in regards to personal rights, protections, and freedoms, which I believe is what pushes me down on the social axis.

As I said above, this may be too simplistic a test to give really accurate or meaningful results, but it does make for a good starting point for those willing to discuss political leanings, views, beliefs, or whatever you want to call them.