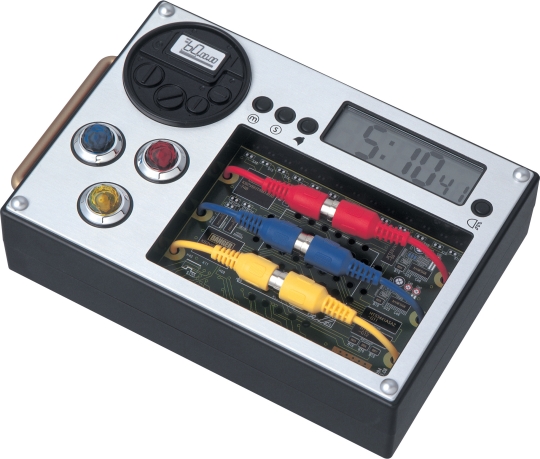 Isn’t that one of the coolest alarm clocks ever made? Just under $35. W00t! (via GeeksOn)

I really want Sony and other developers working on games for the PS3 to release a load of really great games that will finally make me want a PlayStation 3. I already want a Wii, and have since before it was released and became the surprise hit of the current generation of consoles (and I told you folks long ago that it might well be a great hit once released). I already want an XBox 360, primarily motivated by my currently owning an original XBox (well, 2 actually, but I haven’t had a chance to mod the 2nd one into a media player). Believe it or not, I’m rooting for Sony to make the PS3 a console I’d want, too.

Not that my wanting any of them really matters, since I lack the time and finances to actually buy one. But I figure if I find enough good stuff on the console to make me want one, there’s a pretty good chance a lot of other gamers will feel the same. And the better each console does in a generation, the better off the parent company will be for the next generation. And we gamers are never satisfied with the hardware we have now – we’re always looking ahead at what is coming along that will be better. That, and my older brother has a PS3, so I figure if I ever do get one, I can share games with him. I hope.

All that nonsense out of the way, I decided to go looking at how some of the recent PS3 releases are actually doing. Not just checking at my preferred gaming sites (Penny Arcade, Bill at DQ, Joystiq, and Blue’s are the top of my list, by the way), but at what the industry overall has rated these games and what other gamers are rating them. For this, I need MetaCritic.

END_OF_DOCUMENT_TOKEN_TO_BE_REPLACED

In a news announcement that absolutely boggles my mind, we find that Apple has sold 1 million iPhones as of today – weeks ahead of their predicted mark of the end of September.

Apple Inc. said Monday it sold its one millionth iPhone on Sunday, just 74 days after its introduction and ahead of its expectations to hit the mark by the end of September.

Hey – I’ll admit I screwed up and bought Bioshock on release day. My unwillingness to wait cost me $50. Those of you that bought the iPhone are now on the slowest data network out there, and out $600 (assuming you bought the high-end, which all my amazing readers would certainly do if they bought at all). Sure, Jobs is giving $100 back, but that’s in the form of iTunes credit, so many folks will end up spending more there, giving even more money to Apple.

So while this news baffles me, there’s no denying that Apple has elevated its cult status far beyond the early turn-of-the-century hold it had. And folks out there still can’t wait to stay ahead of others on the gadget train. Check back with me in 2010 – I’ll probably be ready to hope on the iPhone train then. Certainly no sooner, and maybe still not then. But maybe that’s because I still think a phone should be a phone – everything else is fluff.

And hey – the investors like it.Ã‚Â  Capitalism clearly knows more than I do.