Catching up on my latest techie/geek news, I saw this news-bit about the new Nokia N-Gage platform update, the N-81 gaming platform. It’s a fine looking update from their awful first- and second-gen gaming phones. 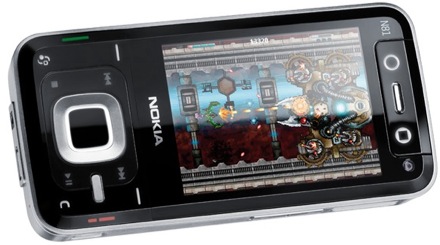 This is Nokia’s new N-81 gaming device built upon their revamped N-Gage gaming platform. The S60 device packs HSDPA (sorry, no US band support) for on-line gaming, integrated speakers (and 3.5-mm headphone jack), and D-pad navigation for getting your game on. Still, it’s not just for gaming as it fully supports all the audio and video you’d expect in a new “pane-driven,” UI which carousels your windows instead of lining them up in tabs — a UI which will evolve in the coming months in line with Ovi. On sale Q4 in Europe in an 8GB flash model (Ã¢â€šÂ¬431/$585) or Ã¢â€šÂ¬360/$490 pre-bunged with a 2GB microSD card.

The screen and control layout looks so much better than the previous versions. There’s a gallery with more images in the Engadget article linked above. This might even be enough of an improvement to get folks to finally buy in to the N-Gage platform.

A cool little router monitor plugin for Firefox (via LifeHacker)

We’re all stupid at some point in our lives.  Simple things like putting batteries in the correct way sometimes eludes even the best of us.  But when you are going to rob a bank, be sure to use your smartest brain cells.

He told the teller not to do anything stupid.

Too bad the bank robber didn’t take his own advice.

After he robbed a Bank of America on West Hillsborough Avenue last December, court records say, Etni Ortiz left his resume behind — dropped it, actually, when the bank’s dye pack exploded. Police found it outside the bank in a pile of dye-stained money. There were also photos, one of Ortiz. The picture, too, was stained with red dye.

Well, so much for that spree.  I think the resume is a stroke of genius in a way, though.  Now, someone can help him properly update it so he can find a better job.  They probably will also coach him to leave “Failed bank-robber” off the skills section, though.  Maybe just put something like “Escaped bank premises with over $3000 in two robberies” without highlighting the getting caught nor leaving behind a resume bit.  Hell, this makes me think I should start a bad criminal resume writing service.