Just in case you forgot to check these out lately: 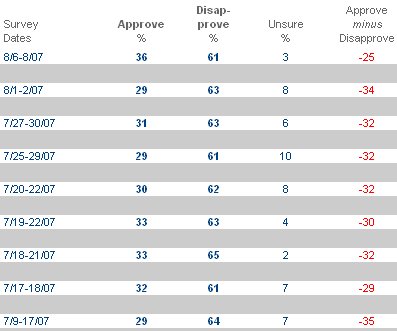 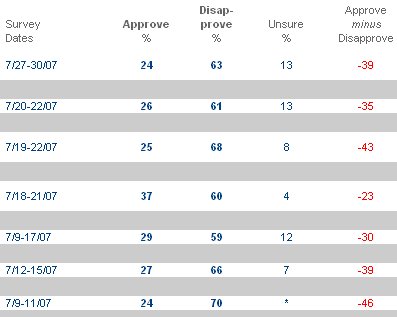 For the record, the link to the Congressional ratings points to CongJob.htm, but I really believe ConJob.htm would be more appropos.

I would guess the truly spineless nature of the Democrats in bending over, lubing themselves up, and spreading wide open for Bush and his hatred of American freedoms, allowing him to take away more of our rights every chance he has, probably play heavily into the approval ratings for Congress sitting below those of the President.

Just saw this, so I have no idea how old it is (although I believe it to be very recent) – Karl Rove has announced he will retire as deputy White House chief of staff at the end of the month.

Mr. Rove was one of the last remaining senior members of the team that followed Mr. Bush from Texas to the White House in 2001. But increasingly he had to work with newcomers brought into the White House by the chief of staff, Joshua B. Bolten, to help navigate a new era in which the White House has often had to seek accommodation with its political opponents – and Republican Congressional allies – where it once was able to run past them.

I know it is fashionable to insult Rove, blame him for all the ills of the world, and so on. I really know little about him, so will just pass on the news and sign off.

While this really isn’t of actual value to anyone I know, I think it’s pretty cool that there is a version of VMWare out for OS X now. If you just have to run Windows or Linux in a virtual session on your Mac, now you have the option. I don’t know any Mac-only folks, so that’s why I don’t think anyone I know would benefit from it, but since I’m considering a Mac for the wifey-type-person sometime in the future, I’ll have to keep this in mind for us/her.

If you want to learn more about the product, here’s an outstanding review of the product, with screenshots, actual virtual machine build and test information, and a few comments from others who have tried the tool.

Roughly one year ago VMware announced that they would release a version of their popular virtualization software for the OS X platform. Since that time they have steadily released beta’s versions of Vmware Fusion and with each release seen continual improvements. Now after a year of heavy development the company has pulled back the curtains and unveiled VMware Fusion 1.0.

As a longtime VMWare user in the Windows and Linux world, I have to say that the company behind this puts out a good product. And for the features and options you have, I think you’ll find VMWare Fusion isn’t even cost-prohibitive at its $59.99 price point.

Really, I don’t know any other possible way to interpret these study results than to believe I was first-born in my family, even though my parents tell me I have two older brothers.

The eldest children in families tend to develop higher I.Q.Ã¢â‚¬â„¢s than their siblings, researchers are reporting today, in a large study that could settle more than a half-century of scientific debate about the relationship between I.Q. and birth order.

Clearly, then, I must have been born first in my family.

Three points on an I.Q. test may not sound like much. But experts say it can be a tipping point for some people Ã¢â‚¬â€ the difference between a high B average and a low A, for instance. That, in turn, can have a cumulative effect that could mean the difference between admission to an elite private liberal-arts college and a less exclusive public one.

And hey – I’m the only one in the family who went to an elite private liberal-arts college.  It explains why I’m a Bush-hating, tree-hugging, flaming liberal, too!  What an excellent study.  eBeer all around.  🙂