The fifth of several posts on buttons I need to have so I can wear them to work. 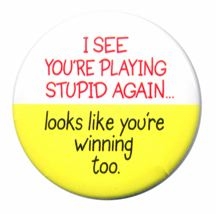 OK, I’ve finally started watching Lost.Ã‚Â  I’m only 2.5 seasons behind.Ã‚Â  I wasn’t that interested at first, but after about 4 episodes, it started clicking with me.Ã‚Â  So here’s an eye candy babe I’ve been seeing a lot of on Lost.

END_OF_DOCUMENT_TOKEN_TO_BE_REPLACED

In a recently released study, researchers say children who receive better childcare have better vocabularies, but are more likely to show behavioral problems in later elementary years as their time in childcare increases.

The findings come from the largest study of child care and development conducted in the United States. The 1,364 children in the analysis had been tracked since birth as part of a study by the National Institutes of Health.

The researchers said the increase in vocabulary and problem behaviors was small, and that parenting quality was a much more important predictor of child development.

Just something to think about if you shuffle your kids off to childcare every chance you get and pass on spending more time with them when you have the chance to. I’m certainly feeling more guilty than I used to about the amount of time my children spend in daycare.

“I’m not sure we communicated this, but the kids who had one to two years of daycare by age 4Ã‚Â½-which was typical for our sample-had exactly the level of problem behavior you’d expect for kids of their age. Most people use center care for one or two years, and for those kids we’re not seeing anything problematic.”

Could it be that most media outlets are over-reporting the negative aspects of childcare? It seems that perhaps the potential downsides of childcare make for a more sensationalistic report than the upsides or the importance of genetics and parenting. I’ll have to say, this certainly bears some small resemblance to my often repeated claim that mass media is biased towards sensationalism more than any particular political bias (which generally is expressed as the liberal media bias). I’m starting the think that maybe my evaluation of mass media providers is a better descriptor than the view held by those convinced of the liberal bias of the media. Of course, I’m used to believing myself more than anyone else. Yes, there is often a liberal bias, but I think more often the bias is sensationalism over all other things.

[tags]Better vocabulary from better childcare but more behavioral problems from more childcare?, How childcare quality and time correlates to vocabulary and behavioral states[/tags]