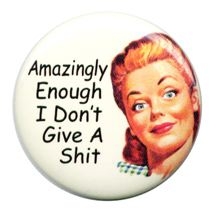 The fourth of several posts on buttons I need to have so I can wear them to work.

END_OF_DOCUMENT_TOKEN_TO_BE_REPLACED

From a few years back: Tommy Chong’s arrest for selling drug paraphenalia online and our (still) over-protective government’s efforts then

A guide to changing eye colors with Photoshop at TechEBlog

I’ve just read the best commentary on the DC gun ban ruling I’ve seen (out of the very few places that have covered it) over at the Reason magazine web site. As the real root of the article, the author wonders why the federal appeals court ruling the gun ban unconstitutional is “interpreting the Second Amendment broadly,” as The New York Times reports. After all, as he points out, actually protecting free speech rights or unreasonable search and seizure rights would not be seen as overly broad interpretations of First or Fourth Amendments.

This oddly bifurcated view of an enumerated constitutional right helps explain why the gun control debate in this country is so acrimonious. When one side considers the Second Amendment a nullity and the other side thinks it counts for something, there is no safe middle ground.