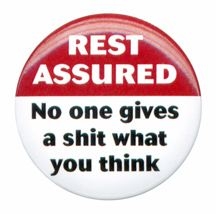 The second of several posts on buttons I need to have so I can wear them to work.

I can’t say I’m surprised, are you?

Congressman Henry Waxman (D-Calif.), who took over the helm of the House Committee on Oversight and Government Reform in January, took a long look at the Valerie Plame affair today and found that the White House never conducted an internal security investigation of who leaked the formerCIA agent’s identity, despite a pledge by President Bush to do so.

Duh! No politician is going to perform an investigation, or at least a well-managed investigation, when the damning evidence will lead back too high into that politician’s close ranks of advisors, aides, or peers and close colleagues.

END_OF_DOCUMENT_TOKEN_TO_BE_REPLACED

If you play City of Heroes/Villains, read about the updated Hamidon encounter.

It seems the Democrats have been working on a bill in the House of Representatives which wouldgive the District of Columbia a full rights seat in the House (there’s more to the bill, but I’m just zoning in on the big target of the bill – bear with me, please). Part of the argument for the bill is that denying DC residents full Congressional representation is unconstitutional. On the surface, that seems like a reasonable claim (to me at least). From the discussion of the bill, we even get:

Republicans have been delaying the vote on this bill because the Constitution states that congressional seats are to be apportioned among the statves, and DC is not a state. Republicans, however, finally agreed to move forward with the vote with one ammendment to the bill. What ammendment? Well…