Take garbage. Dump it in a big, scary-looking contraption. Ignite it with a high-powered arc of electricity. ???? Profit!!!

Shades of Dr. Emmett Brown’s Mr. Fusion only larger, this plasma convertor created by work done over 2 decades by Joseph Longo promises to turn garbage into plasma. It also generates more power output than it takes in from the power grid. This is no perpetual motion machine – it doesn’t generate greater power from nothing. It burns trash via very high power electrical zaps (that’s a technical term), firing up to around 30,000 degrees fahrenheit, using the heat from burning trash to generate more energy than it takes to burn the trash. 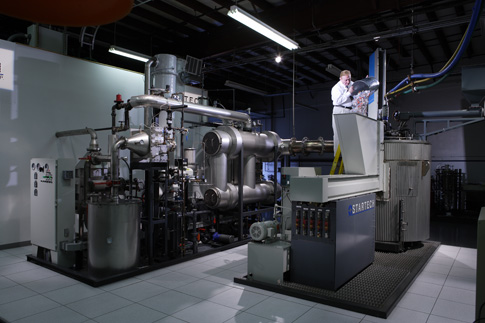 It sounds as if someone just dropped a tricycle into a meat grinder. I’m sitting inside a narrow conference room at a research facility in Bristol, Connecticut, chatting with Joseph Longo, the founder and CEO of Startech Environmental Corporation. As we munch on takeout Subway sandwiches, a plate-glass window is the only thing separating us from the adjacent lab, which contains a glowing caldera of plasma three times as hot as the surface of the sun. Every few minutes thereÃ¯Â¿Â½Ã¯Â¿Â½s a horrific clanking noise-grinding followed by a thunderous voomp, like the sound a gas barbecue makes when it first ignites.

Perhaps the most amazing part of the process is that it’s self-sustaining. Just like your toaster, Startech’s Plasma Converter draws its power from the electrical grid to get started. The initial voltage is about equal to the zap from a police stun gun. But once the cycle is under way, the 2,200Ã‚Â° F syngas is fed into a cooling system, generating steam that drives turbines to produce electricity. About two thirds of the power is siphoned off to run the converter; the rest can be used on-site for heating or electricity, or sold back to the utility grid. “Even a blackout would not stop the operation of the facility,” Longo says.

It all sounds far too good to be true. But the technology works. Over the past decade, half a dozen companies have been developing plasma technology to turn garbage into energy. “The best renewable energy is the one we complain about the most: municipal solid waste,” says Louis Circeo, the director of plasma research at the Georgia Institute of Technology. “It will prove cheaper to take garbage to a plasma plant than it is to dump it on a landfill.” A Startech machine that costs roughly $250 million could handle 2,000 tons of waste daily, approximately what a city of a million people amasses in that time span. Large municipalities typically haul their trash to landfills, where the operator charges a ‘tipping fee’ to dump the waste. The national average is $35 a ton, although the cost can be more than twice that in the Northeast (where land is scarce, tipping fees are higher). And the tipping fee a city pays doesn’t include the price of trucking the garbage often hundreds of miles to a landfill or the cost of capturing leaky methane-a greenhouse gas-from the decomposing waste. In a city with an average tipping fee, a $250-million converter could pay for itself in about 10 years, and that’s without factoring in the money made from selling the excess electricity and syngas. After that break-even point, it’s pure profit.

The article is lengthy, but the details are fascinating. I’m rarely optimistic, but this is technology that really could help reduce our dependence on foreign suppliers for energy demands (particularly oil, naturally).