I have to admit that I think dollar coins are pretty cool. I like them, and think the US following Canada’s lead in replacing one dollar bills with dollar coins is a good idea (as much as I hate to let Canada lead the US in anything). The government seems mystified as to why the dollar coins aren’t catching on. In case any government official with any power in this struggle reads my site, here’s the answer:

The dang dollar coins are too hard to find. Yep, it’s that simple – make enough that the coins are everywhere, and people will use them. Don’t try to seed them through Wal-Mart or put out 1% of the US one dollar money as coins (or however little it was). Make scads of them, give them to every bank, store, school, business, whatever. Instead of collecting them, if there is a large supply such that they are easy to find and are seen everywhere we go, people will start spending them like any other coin instead of saving them.

Unfortunately, no one in the government asked me for guidance on this, so instead of just getting lots and lots and lots of dollar coins out, the Mint is trying a new annually changing dollar coin design, hoping the novelty of the coins will get people interested.

While this will get people interested in the coins, and will get lots of people trying to find them, they will be kept as collectibles instead of spent and spent and spent like well circulated dollar bills are. 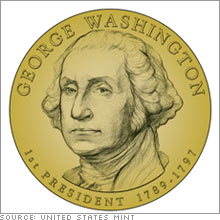 The U.S. Mint is hoping that Martin Van Buren and Millard Fillmore can do what Susan B. Anthony and Sacagawea couldn’t – get Americans to use dollar coins.

The Mint on Monday revealed the design of the new U.S. $1 coin, which will be issued in a series that will eventually include the faces of each U.S. president.

It will release four new presidential dollars each year, starting with George Washington, John Adams, Thomas Jefferson and James Madison in 2007. The Van Buren dollar will be released in 2008 and the Fillmore in 2010.

Well, it’s a start. I guess coin collectors will be happy.

“We think Americans are going to want to collect the series, and that will drive the coins through the economy,” said U.S. Mint Director Edmund Moy.

What? People collecting will drive the coins through? How will people removing money from circulation push more of that money through the economy? That’s just dumb. Drive through the economy means spent on goods and services often, not taken by individuals often. Make half the US one dollar money supply coins instead of bills, then you’ve got something. This guy gets it:

But limited Sacagawea quantities led to too many being stashed away by collectors, reducing circulation and thus familiarity, said Rod Gillis, head of education at the American Numismatic Association in Colorado Springs, Colo.

“As long as we have the paper currency out there, dollar coins will never be successful,” Gillis said. “We’re going to have to discard the $1 bill or mass produce so many of these coins so they’ll be out there at retailers.”

So why are people in charge not asking people like this guy? I have no idea. But he’s right (although I don’t think we have to eliminate the one dollar bill). And the coin will fail again, because the strategy to get the coins into circulation is wrong. On the other hand, I’m collecting mint sets of these for my kids, because I think they are cool.