Oh man, are robots even infiltrating our pr0n industry?

Scientists are using ‘mating’ robot fish to verify whether early humans had flexible ‘rods’ instead of backbones. They say robot tadpole sex might help shed light on how our early ancestors evolved backbones, reports LiveScience.

OK, I guess out naughty movie bits are safe for now. Still, how often do you get to hear scientists are dealing with mating, humans, robot fish, and flexible ‘rods’ all in one sentence? And people say scientists have no fun!

[tags]Robot pr0n?, Robots and their flexible ‘rods’, Robots mate to help scientists understand the secrets of early life and evolution[/tags]

Consider avoiding Florida in the not-too-distant future. The University there is working on a $3.64 million project for the Army, creating robots capable of engaging enemies on the battlefield alongside our human military men and women.

The one-year deal would lay the foundation for creating “a combat force of humans and robots” and investigating “how robots and soldiers might work together” more effectively in the battlefield, project officials said.

END_OF_DOCUMENT_TOKEN_TO_BE_REPLACED

In a move that is surely a surprise to dozens of people around the country, Fox has cancelled OJ’s book and TV special due to public outcry against it. If you aren’t aware of this garbage (and shame on you, as I’ve covered it recently here), Simpson gives an interview on his book “If I Did It” which recounts how, hypothetically, he would have killed his ex-wife and her friend, if he’d been the killer.

Now apparently, the media whores at Fox Television (I’m thinking formost of Rupert Murdoch) discovered that even the dirty-laundry loving Americans have limits:

“I and senior management agree with the American public that this was an ill-considered project,” said Rupert Murdoch, News Corp. chairman. “We are sorry for any pain that this has caused the families of Ron Goldman and Nicole Brown Simpson.”

A number of Fox affiliates had already decided not to air the special when it was broadcast, but now this is not an issue. Hell – even an industry publisher could see it was a bad idea.

Wow! A group inside the industry thinks this is evil? You really know you’re low when your own kind calls you out. It’s like sharks telling lawyers they’re too aggressive and blood-thirsty.

I’ve finally started a subscription to MIT’s Technology Review magazine. My first issue arrived last week, and I was all gaga over this totally cool (no pun intended) power providing window. I’m sure others won’t be as impressed as I am, but then again – I’m easily impressed. 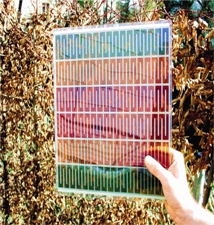 The next building material to generate solar power may be windows. In a dye-sensitized solar cell, dye molecules attached to nanoscale titania particles are held between two panes of glass; the dye absorbs light and releases electrons, which are harvested by the Ã‚Â­titania. The basic concept was invented 15 years ago by MichaÃƒÂ«l Ã‚Â­GrÃƒÂ¤tzel, chemistry professor at the Ãƒâ€°cole Polytechnique FÃƒÂ©dÃƒÂ©rale de Lausanne in Switzerland. Now, the technology is in limited production by Konarka, a company based in Ã‚Â­Lowell, MA, and will soon be more widely available. “The normal configuration has glass on both sides and can be made to look like a colored glass,” GrÃƒÂ¤tzel says. “This could be used as a power-producing window or skylights or building facades. The wall or window itself is photovoltaically active.” This could give a whole new meaning to the term “power windows.”

I can’t figure out yet how to put these to use, but I gotta get m3h some of them winders.

[tags]Power via solar-cell windows, New technology in windows for home/business[/tags]

Here’s one of my new favorite characters/bios.

For all you gamers – the source of Leroy Jenkins call-outs.