I sense a little bit of hostility here, wouldn’t you agree? For instance, on credit repair spam:

No, you can’t – that’s my personal responsibility, and I’m certainly not going to give business to anybody who says otherwise. You lose, you’re a loser, and you’re going to burn in hell. I don’t remember giving you permission to spam my snail mailbox, either.

I feel the same way, although I’ve just resigned myself to spending 15-30 minutes every damn day clearing spam and making sure my junk mail folder doesn’t have real mail before clearing it. Thanks to Bayesian filtering, I’ve had only 3 legitimate emails marked as spam in over 10,000 junk emails this year. The last of those was over 3 months ago. But it is unfortunate that I need the filtering at all – death by papercuts to spammers.

As I’ve mentioned before, I am now doing most of my site posting via email, thanks to my site being blocked where I normally worked on it. I believe things are going reasonably well given the limitations with which I am dealing. However, I know some articles are going up with broken links. I’m not sure how to fix this other than manually editting the posts with this problem when I get home each night. I’ll look in to better fixes for this, and in the meantime, I apologize in advance for any broken link posts that come through.

The folks over at IGN got their hands on the Playstation 3 and came away with this impression:

Compared to Microsoft’s uber-comfortable Xbox 360 pad, the SIXAXIS feels cheap, plasticky, uncomfortable and disconcertingly light – almost as if it’s going to fly out of your hands during those more extreme gaming moments.

More worrying still, the newly-designed lower L and R shoulder triggers feel more like they belong on an early controller prototype than the near-final model. Replicating the 360 pad, rather than being simple shoulder-mounted buttons, the triggers are now hinged horizontally along the controller, with pressure forcing them inward along the bottom – like triggers then, really.

So given the troubles we’ve heard about all year with the PlayStation 3 – the pricing issues, the Blu-Ray delays, the early inventory shortcomings, and so on – does Sony really need more negative press on this console? I’m still hoping for a sudden burst of awesome for something PS3 related. The more competitors in the console arena, the better the systems and games for us gamers. I suppose we’ll see come November when these start selling for real. (via Kotaku)

To celebrate John Lithgow’s 61st birthday, I believe I’ll watch some Third Rock from the Sun tonight. It took me a while to find a good image. Hopefully you recognize him from one of his finest roles: 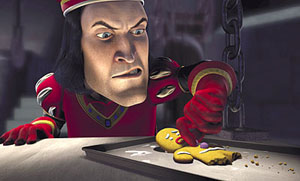 If you had this watch and its magic-like powers, would you use it for good or for evil? END_OF_DOCUMENT_TOKEN_TO_BE_REPLACED

Thanks to Tim, a former co-worker and the recently mentioned “A reader” in a previous post, for this news of criminal idiocy:

Sometimes people really do get what’s coming to them. Brothers Jared and Cooper Colwell and two other men were sleeping at their home in Midvale, Utah last Tuesday, when a pair of ski-masked crooks busted into the house and demanded everyone’s cash, wallets, and cellphones. Sounds like your typical home invasion, except for the fact that Jared thought he recognized one of the burglar’s voices — it sounded like a friend of theirs named Randall Talbot who had previously crashed at their pad for a few weeks. Figuring they had nothing to lose, the men texted Jared’s cellphone with a message saying “Randy, I really want my phone back; I’ll pay you $300 for the phone right now” (must have been a Treo). If you’re stupid enough to rob your friend’s house it stands to reason that you might be stupid enough to collect a ransom on the stolen merchandise as well, and sure enough, Randy and his partner-in-crime Justin Brooks agreed to a meeting at the local Smith’s store. As you’ve probably guessed by now, the Colwells immediately called the cops, who were there to greet Randy and Justin as they emerged from behind a dumpster at the rendezvous point — reportedly poised to grab the $300 and take off. We tip our hat to you, soon-to-incarcerated cellphone thieves: out of the many stupid gadget criminals who have graced these pages, you two are by far the biggest idiots of them all.