As I began reading this long eassy on many of the stupid animals in the Dungeons and Dragons universe, I really wanted to hate it. The article begins with a two-paragraph long wall of text. I don’t care much for the font, text-size, nor color combination of the page. The background is too busy. His dismissal of Dungeons and Dragons comes off as snooty. But damn if I didn’t find the write-up quite entertaining. 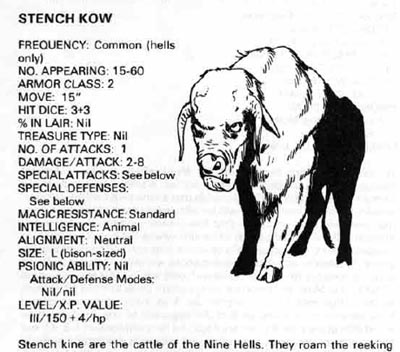 Despite the clever misspelling, you’re looking at an evil cow that stinks. Even better, read the first sentence there. “Cattle of the Nine Hells.” Smelly cows from hell. Awesome.

Sometimes, when its your job to be creative, you really don’t want to be. Take Werewolves for instance. Every fantasy game seems to have them. But after a while, an author wants to leave his mark. He wants to add a twist that no one’s thought of. In Dungeons and Dragons, this is often see by simply reversing the word “Werewolf” so that it cleverly appears as “Wolfwere”. Since this was done a long time ago, later writers would have to add their own novelty to the were-act. So in come were-foxes, were-sloths (no kidding), were-bears, and other fun little crossbreeds. And then people thought they’d be original and call a wolf that turns into a man a “Wolfwere”. That only started someone onto the path of doomed…well…check this out: 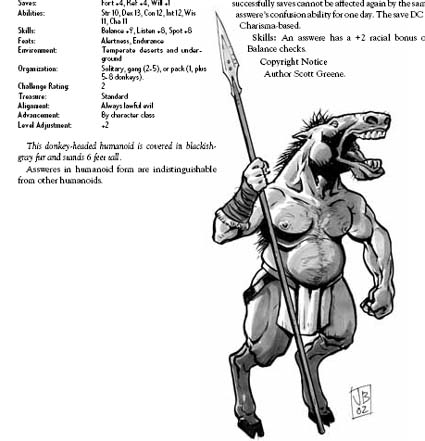 That’s an asswere, by the way. And he takes time to properly mock the concept and the creature.

Trust me – if you were in to Dungeons and Dragons when you were younger (and probably even if you are in to it now), there’s a good chance you’ll get some chuckles out of the article, if you can make it past the intro wall-of-text. It’s a bit long, but it gets better as it goes.

He has a section on hybrid man/animal horrors, creatures designed to look like other things (think monster who looks like a ceiling, for example), inexplicable monster designs, and his own top 5 worst monsters. I especially like his number 5 example, but check out this wonderful commentary on the effect and effectiveness of his number 1 bad monster:

Yes, it’s an Ork wearing panties on his face…because that’s what how the Raggamoffyn want him. His body now does the bidding of someone’s dirty laundry…his will is not his own. And since we’re talking about a dirty laundry monster, that’s the dumbest thing I’ve read all night. If I ever played D&D, I’d have the players attacked by a crazy ork with panties on his face. He’d kill them all and all the players would have an irrational fear of monsters that wear their panties on their face. God. Words fail me. It’s just too stupid.

Jared, count me a fan of this one.