This strategy is based on extending Aligned Pair Exclusion but uses Almost Locked Sets to make some clever reductions. From the components used it could be named Aligned ALS Exclusion but Mike Barker, who formulated it first in this thread, hit on “Death Blossom” because it starts with a cell designated as the “stem” which points to Almost Locked Sets, or the “petals”, and is a great deal more flowery.

And the provider of all this Sudoku strategy awesomeness apparently has a new book coming out soon for more Sudoku madness. If you aren’t doing Sudoku, you should be – and this book could be the perfect introduction for you. 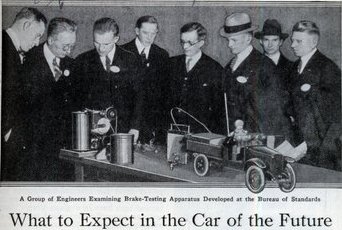 In the future, we can expect some great advances in automotive technology.

LIGHTER, more powerful and comfortable cars, that will cost less, run further without adjustment and will be easier to handle, are being forecast, by automotive engineers.

In Europe automobiles have been made to run as far as eighty miles to the gallon of gasoline. Supercharging, or forcing the gas into the cylinders instead of allowing it to be drawn in by the suction of the piston, has enabled the weight of the motor to be cut down and resulted in performance undreamed of a few years ago.