YES, THE SITE IS SCREWED UP RIGHT NOW.Ã‚Â  Sorry for the shouting.Ã‚Â  I’m working on it, but it will probably be a day or more before I’m able to fix it.Ã‚Â  I’m not sure if I can even post updates right now, giving the problems I’m having with the site software right now.

I wonder if I can convince my wife that God believes she should blow me more often? 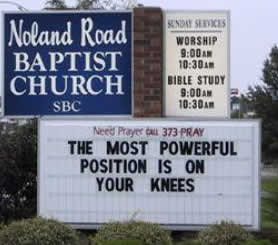 See, proof that God and the church want you on your knees more often.

Stop me if you’ve heard this one before – Two men walk into a videogame store to rob it. Unfortunately for these idiots, the robbery was caught on store camera.

The Game Stop Store in the 3400-block of Cooper sells a lot of high-end video equipment, so when robbers came in they ignored the cash register and took merchandise.

Looking at the video, it appears that the men stole the PlayStation 3 consoles. Guess there weren’t even enough Nintendo Wii consoles for them to get those. Too bad, since that’s the system everyone wants now.

According to the story, one of the two robbers has already been caught. No word on how much the gaming systems sold for. (via Kotaku)