There’s something about this dental advertisement that’s just, well, a little wrong. Not sure how to explain it better, so see for yourself

Oh my {$diety} this is scary, although not necessarily surprising. A woman who started using a tanning bed twice a day at age 14 developed cancer after 7 years of abusing her skin this way. Recently, she passed away from skin cancer at age 29.

Zita Farrelly began using a sunbed at the age of 14 and saved up to buy one when she landed her first job.

For seven years she had tanning sessions twice a day. When her worried mother stopped her using the sunbed more than twice a week she borrowed a friend’s.

I’m guessing her friend might look at this and think something like “I helped cause that.” At least, I know I would.

I know the appeal of buying off-brand batteries for your cell phone or laptop. However, there is often a reason the off-brands are less expensive, and sadly sometimes the generics can be very unstable and cause real serious problems when they fail.

A man has died in China after his mobile phone battery exploded in his chest pocket.

Welder Xiao Jinpeng was working at the Yingpan Iron Ore Dressing Plant in the western province of Gansu.

He died at a nearby hospital after emergency treatment failed.

Motorola said it was “highly unlikely” that one of the company’s products was to blame – and suggested the dead man might have been using a fake phone or battery.

So the new rule for buying generics is that while you might be OK buying generic/refilled ink-jet cartridges, you probably don’t want to buy off-brand batteries. Admittedly, even the name brand batteries have problems at times, but I believe they still have much lower failure rates. While we don’t know that this man was using a generic battery, I’m willing to go out on a limb and guess it wasn’t a genuine Motorola.

Sometimes the robots try to hide their steps to world domination. Other times, they get bad humans involved who broadcast the robots’ future build plans to the world. Here, I present to you the Matrix style body harvester being built by Vision Robotics. 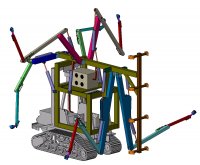 Sure, they show it as an orange harvester, but just crank the size up an order of magnitude or two and it will be the perfect size to pick the body pods, copper-top.

[tags]Body Harvester – a la Matrix, The robots will take over, The coming robot uprising, Vision Robotics build the body harverster of the future[/tags]