Save money by upgrading your hard drive yourself (via Joystiq)

It’s really easy to answer the question Ã¢â‚¬Å“Who is to blame for the Virginia Tech slayings?Ã¢â‚¬Â – the shooter is to blame. However, there are going to be many, many, many, many other people, ideas, and entities blamed for the shooting. To see where the tally is, I recommend checking out The Blame Game for an up-to-date count. Here are just a few (my comments in parentheses after each blame):

It’s the fault of violent video games. (I was expecting idiot Jack would make this claim – glad to see someone tracking this info)

It’s the first victim’s fault. (it is shameful that anyone would even suggest this one)

It’s the Second Amendment’s fault. (Hey, didn’t I already cover this? Why yes, yes I did)

It’s the Democrats’ fault. (glad we have blame for the left and the right here)

It’s the fault that schools teach that the theory of evolution is fact. (sure – let’s just jump from blaming the schools and blame Darwin himself)

As I write this, the list is up to 56, and more additions are being made based on commentors’ responses. Drop by and see who or what is to blame. This will make it easier for you to join in discussions that avoid blaming the pathetic loser who made up persecution so he could die a cowardly death while believing he was doing something grand. 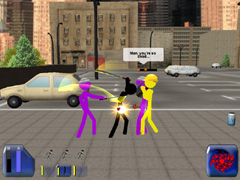 Everybody is Kung-Fu fighting, stick style is this little demo. Text grab from the hosting site:

This demo is the same we sent to ArtFutura. It gives you access to the first level of the game. Please read the readme.txt file before playing. Remember, this is a work in progress.

END_OF_DOCUMENT_TOKEN_TO_BE_REPLACED

There is a lot of good commentary on Salon.com, in my opinion, even though there is a massive liberal bias to what is published there. I recently paid for a subscription because there was enough on the site that I wanted to read but couldn’t that I felt it was worth investing a few dollars to be able to access it. However, the latest article I’ve read on Salon would sound to me like the creation of any of a large number of well known conservatives (also on video so you can hear it yourself) trying to restrict out rights and freedoms were it attacking any American right other than the 2nd amendment guarantee of our right to bear arms. But rather than the more well-known conservative grabs for restricting Americans’ rights that we’ve seen recently, this Salon article is a liberal call to repeal the 2nd amendment, claiming (in reference to the recent Virginia Tech massacre) &147;hitting the delete button on the Second Amendment surely would lower the odds against future mayhem.&148; Maybe I’m a moron, but I don’t see that ridding the US of the 2nd amendment would necessarily and assuredly lead to the reduction in odds of future mayhem. On the other hand, I do believe that allowing students with carry permits to actually carry firearms on campus would lead to fewer victims in future cases, simply because those most in danger are also best set up to defend themselves. But like I said – maybe I’m just a moron for thinking that.

April 18, 2007 | WASHINGTON — Fifteen unambiguous words are all that would be required to quell the American-as-apple-pie cycle of gun violence that has now tearfully enshrined Virginia Tech in the record book of mass murder. Here are the 15 words that would deliver a mortal wound to our bang-bang culture of death: “The second article of amendment to the Constitution of the United States is hereby repealed.”