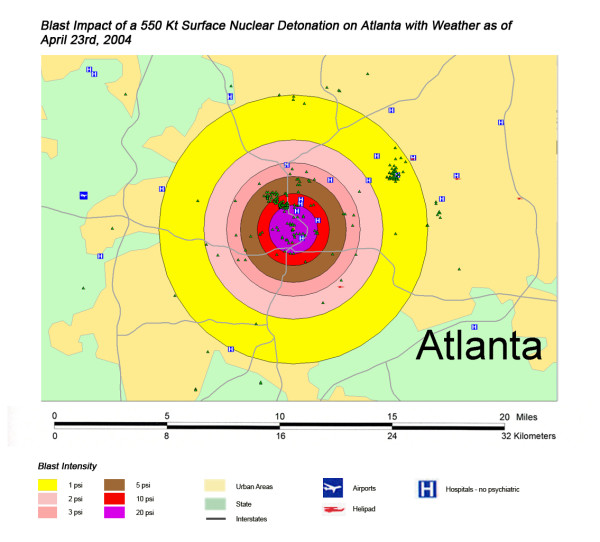 – Image 10, referred to in the quotes below, taken from the original study paper.

On fires and burns, covered in the thermal effects section:

The thermal impacts of a nuclear explosion are always large but scale much faster than blast with larger yield detonations. Thermal radiation decays as the inverse square of the distance from the detonation, while blast decays as the inverse cube of the distance. Figure 1[42] shows the blast and thermal effects from a low free air burst for a 12 Kt (Hiroshima size) and a 500 Kt typical Russian warhead It shows the much larger rate of increase of the thermal component compared to the blast component in going from the 12 Kt to the 500 Kt devices. A similar effect for 20 and 550 kiloton devices is shown in Figures 2a through 2d, using Atlanta as an illustration. For large weapon sizes (> 100 Kt), significant thermal effects extend to much greater radii than substantial blast effects.

Absorption of thermal energy can cause fires in the vicinity of the detonation point and burns to individuals, either directly from flash burns or indirectly from the mass fires themselves.

On blast damage as a result of nuclear detonation:

Most damage to buildings in cities comes from explosive blast. The blast drives air away from the explosion causing objects to be crushed and high winds that can knock objects down, such as people or trees. Four pounds per square inch (4psi) is usually enough to destroy most residential dwellings. Most blast deaths occur from the collapse of occupied buildings, or from people being blown into objects, or objects impacting people. Typically, about half the people whose low rise buildings collapse on them survive the collapse.

The areas of New York, Washington, D.C., Chicago, and Atlanta affected by blast from a 550 Kt nuclear detonation are shown in Figures 7, 8, 9, 10, respectively.

The example of Atlanta, with the widespread distribution of government buildings outside the downtown urban area, demonstrates the disseminated effect in cities located in interior locations away from significant water systems (Figure 10). However, there still is a disproportionate effect on health care systems, though not as distinctive as in the other cities in this study.