A neat gaming project is going on thanks to the folks at the MIT Artificial Intelligence (AI) Lab. The plan is to get people to play a game based on a restaurant interaction, then by processing the collected gameplay data and processing it through some magic-like algorithm, come up with game behavior that will better mimic human response. 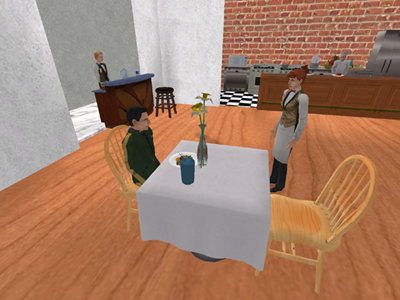 The Restaurant Game takes about 10 minutes to play. It is a two-player game that will automatically find partners for players once you join a server. You are welcome encouraged to play multiple times. In order for this project to be at all successful, we will need to collect a lot of data — data from over 1,000 10,000 gameplay sessions. Play early, play often, and please spread the word!

This project attempts to address two frustrations I experienced as a professional game developer. 1) Convincing human social behavior is difficult to model with existing hand crafted AI systems. 2) Play testing by people outside of the development team typically comes too late to have a major impact on the final product. This experiment aims to generate AI behaviors that conform to the way players actually choose to interact with other characters and the environment; behaviors that are convincingly human because they capture the nuances of real human behavior and language.

I’ll be downloading and installing this little gem tonight after work. There’s even a desktop widget available so you can get notification of when there is an available restaurant gamer waiting for a partner. (via DubiousQuality)