Well, I missed posting about this on the anniversary, but let’s look back in time as if I posted it on the proper day and remember The Boston Molasses Disaster in all its glor0y (additional sources at CNN and Damn Interesting). On January 15th, 1919, a massive silo, filled with approximately 2.3 million gallons of molasses exploded, releasing a 15+ foot tall tidal wave of molasses which spread at over 30 miles per hour. Keep that in mind when you label something as slow as molasses in January. 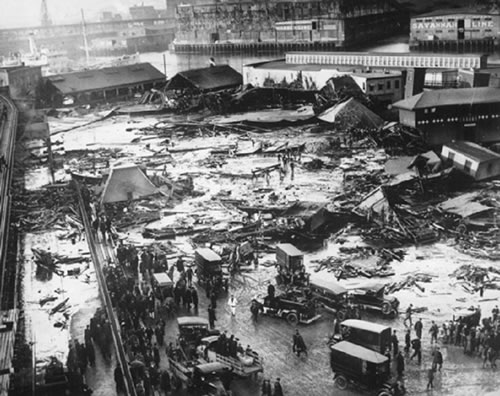 The collapse unleashed an immense wave of molasses between 8 and 15 ft (2.5 to 4.5 m) high, moving at 35 mph (56 kph) and exerting a pressure of 2 ton/ftÃ‚Â² (200 kPa).[3] The molasses wave was of sufficient force to break the girders of the adjacent Boston Elevated Railway’s Atlantic Avenue structure and lift a train off the tracks. Nearby, buildings were swept off their foundations and crushed. Several blocks were flooded to a depth of 2 to 3 feet.

The Boston Globe reported that people “were picked up by a rush of air and hurled many feet” Others had debris hurled at them from the rush of sweet smelling air and a truck was picked up and hurled into Boston Harbor. On that day more than 159 were injured and 21 people and several horses were killed as the molasses crushed and asphyxiated some. After the initial blast the molasses choking the wounded people, horses and dogs became one of the biggest problems.

END_OF_DOCUMENT_TOKEN_TO_BE_REPLACED

Looooong ago, I used to watch comedians on TV.Ã‚Â  That was pretty much before I got married – my wife just doesn’t care to watch comics on TV.Ã‚Â  One of the very funny guys I remember watching is Tom Rhodes.Ã‚Â  Since I heard him on XM Radio yesterday and realized he’s still around, I figured I should point him out.Ã‚Â  If you like comics, try to track this guy down – his stuff is great.