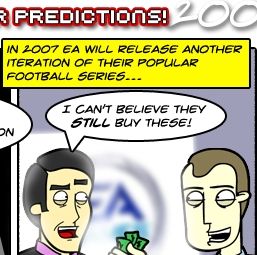 Now this is the kind of quality predictions for the year we need more of. An unavoidably true prediction combined with humor and an insult to a massive number of people. I’m on board.

Long ago (i.e. 1984), the US Federal government decided that ol’ Ma Bell was too big fer her britches. So, as typically happens when a company that is not Microsoft grows too big, the government forced her to split in to many pieces. Protection of the consumer, preventing monopolies, and all the stuff. That left America with AT&T and around half a dozen “smaller” local exchange carriers, like Southwestern Bell and Pacific Bell. Over time, local phone service becomes more important that long-distance service, and the baby bells outgrow AT&T. Now, after many mergers and splits among various parts of various phone providers, we find Southwestern Bell acquiring parts of several of the old baby bells plus AT&T’s old cell service (called AT&T wireless before being bought out by Cingular) via purchase of Cingular Wireless.

All the details are confusing beyond words, but Engadget has a partial breakout to help confuse you more. Beyond the end of that breakout, we now find (via Engadget) that BellSouth is buying AT&T (which was just recently approved) to again decrease the telecom competition space.

Now I wonder how long it will be before the government steps in and breaks up these new monoliths?

[tags]Bellsouth buys AT&T, The regrowth of Ma Bell in duality[/tags]