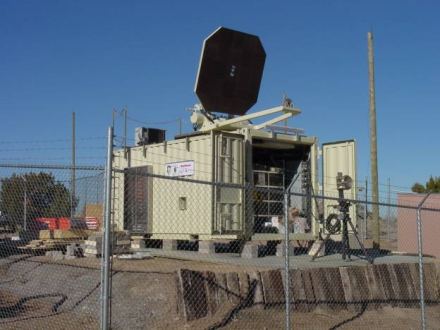 Developed in secret for 10 years, announced in 2001, and secretly tested so we don’t really know how non-lethal it is, here comes the pain gun. Or, as we like to think of it in the Blahg-o-bunker “t3H Pa1n gunz0r!!!1!”

The crowd is getting ugly. Soldiers roll up in a Hummer. Suddenly, the whole right half of your body is screaming in agony. You feel like you’ve been dipped in molten lava. You almost faint from shock and pain, but instead you stumble backwards — and then start running. To your surprise, everyone else is running too. In a few seconds, the street is completely empty.

You’ve just been hit with a new nonlethal weapon that has been certified for use in Iraq — even though critics argue there may be unforeseen effects.

Personally, I’m all for trying this thing out (on bad guys, not myself). I’m one of those soft-hearted people who prefers breaking up minor uprisings without mass elimination of life. Of course, when serious conflict arises, I’m all for havy doses of lethal retaliation, but “t3H Pa1n gunz0r!!!1!” sounds perfect for those instances when less than massive response will do. (via Engadget)