I’m sure this throw-away flashlight advertised in the July, 1947 issue of Popular Science would be a big hit with environmentalists today. 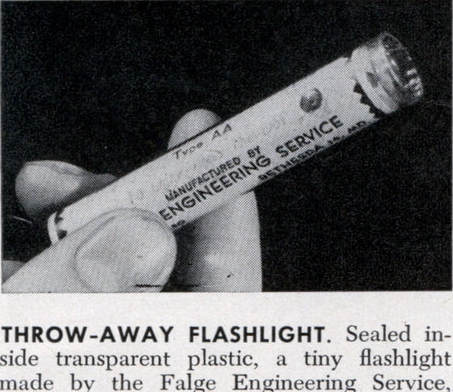 Sealed inside transparent plastic, a tiny flashlight made by the Falge Engineering Service, Bethesda, Md., is intended to be discarded after its one cell is dead. Pressure on the plastic cover operates a switch. Produced primarily to carry an advertising message, like a packet of book matches, the lights are offered only to advertisers, in quantity lots, at a cost of approximately 26 cents each.

For a mere 26 cents per item, you too can contribute to the toxification of the soil in the area where you live.

[tags]Modern Mechanix, Disposable flashlight from 1947, 60 years of destroying the planet[/tags]