News to exactly zero of the people who have ever waited on a game from Blizzard to ship is this release that World of Warcraft: The Burning Crusade has been delayed until January 2007. Over the past 17,000 years, Blizzard has shipped, I believe all of NO games on time. I could be wrong about that, but if any have shipped on time, the number is a sufficiently small percentage of their releases to be considered a statistical sampling anomoly and not an actual indication that Blizzard can ship games at a date in the vicinity of the announced ship dates.

Blizzard Entertainment(r) today announced that the release date for World of Warcraft(r): The Burning Crusade(tm), the highly anticipated expansion for World of Warcraft, will be in January 2007. By adding a few extra weeks to the development cycle beyond its original target date, Blizzard will be able to extend the closed beta test and further refine the new content that will ship with the game.

Oh, and throw in a couple of TMs or Registered trade mark, or some other fancy legal symbols up there in my post. I’m sure someone somewhere might think for just a moment that my posting about the company Blizzard, which has produced mediocre console games, excellent PC games, and a number of vaporware titles over the past 20 or so years, will somehow be mistaken as talk for the company Blizzard which I own or some crap like that. Likewise for the game title – it ain’t my game, so throw in some official looking legalese markers of some sort there. Bleh.

I don’t recall the exact date, but word from Kotaku is that today in 1997 Microsoft released Age of Empires. This was the 2nd Real Time Strategy (RTS) game I ever really got in to. Warcraft was my 1st.

Well, the PS3 has received FCC approval. This means all that stands between you and a PS3 on launch day is, well, having the $2500 it will take to buy one off ebay, since I’m sure you’re not one of the lucky (fewer than) 500,000 in the US who got a pre-order in on time AND who will actually get their pre-ordered product on release day. But at least there isn’t a regulatory issue holding up the product now. (via Kotaku)

ManJam, the social networking site for men seeking men. Yes, my readers don’t need this, but I thought the name was funny enough to post it.

If you aren’t already doing it, you should probably start watching the Black Friday deal sites (my favorite is GottaDeal, but google will show more) to see what deals you can get on Friday after Thanksgiving.

It’s time to update your Paint.NET application to version 3.0. Thumbs-up from TechCrunch

New online organizer Scrybe is getting some early, brief press from TechCrunch 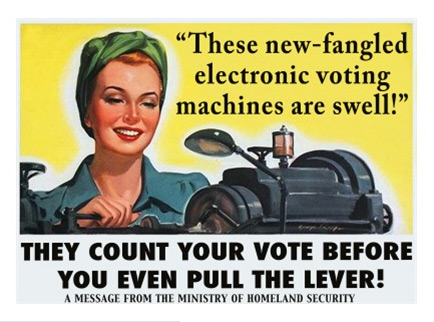 This feels a little too true, given the recent problems many places have had with voting machines. (via tingilinde)