Some clever person has put together a chart showing sales figures for the first six months for recent consoles. The numbers are rather interesting, I think, and suggest last year’s claims about the Wii being a certain-to-fail doom and downfall plan for Nintendo were off base. Of course, I also think everyone who pays attention to the gaming market already realize that the Wii is beating up on everything else out there except for the Nintendo DS, and that last year’s predictions of Nintendo’s death were very wrong. 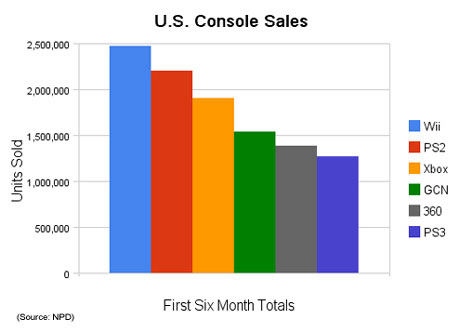 To steal a term coined by Kotaku, I put together the above charticle juxtaposing the first six month console sales of Wii, 360, PS3, PS2, Xbox, and GameCube. First, the Wii has sold better than the mighty PS2 after the first six months. Amazingly, both the PS3 and 360 sold worse than the GameCube for the same period (!). Cumulative first six month totals in units sold are as follows:

The article doesn’t specify initially that these are measures of US sales, but later verbiage in the article makes me think that’s the message. I’m guessing Sony isn’t that happy with these numbers, given that the PlayStation 3 sold around 81,000 consoles last month, putting them way behind Nintendo and Microsoft.

Well, since every gaming site in the universe is covering it, and since I claim to be a gamer, I suppose I need to pass on the news that Starcraft II has finally been announced by Blizzard. I believe that at this point, this is news to exactly no one. Blizzard promises big gaming announcement at a big Korean gaming event, the Starcraft2.com website mysteriously got an update recently to point it to something spoooooky at Blizzard’s main domain, and it’s only been an Internet-eternity since the original came out. I’ll admit the screenies look mighty-purty, but even though I enjoy real-time strategy games, I just found the original to be kinda “m3h” for me. But for those of you who are gamers and somehow missed the announcement, consider yourself now caught up.

Blizzard president Mike Morhaime says, “With StarCraft II, we’ll be able to do everything we wanted to do with the original StarCraft and more … We recognize that expectations are high following the long-running popularity of the original game, but we plan to meet those expectations and deliver an engaging, action-packed, competitive experience that StarCraft players and strategy gamers worldwide will enjoy.” Meanwhile, IGN’s man in Korea, Charles Onyett says, “SC2 looks, at least visually, strikingly similar to SC1 – both in unit and map designs.”